GOC London's progress around the Capital Ring walk has been delayed by the lockdown but we are gradually catching up with a more frequent programme of walks. We continued our clockwise circuit of London on a rainy morning in early October. The day's walk was again organised into two groups setting off an hour apart, a pattern which seems to be working well. Although the weather had been atrocious, the heavy rain fortunately gradually dissipated, and the most we had to cope with thereafter was some drizzle.

This section of the Capital Ring was another appealing one and encompassed a range of landscapes including canals, hills, woodland, and historic buildings. A highlight was passing through Harrow-on-the-Hill, which is dominated by the famous Harrow public school, whose oldest buildings date form 1615. Harrow is also the furthest the Capital Ring reaches from central London.

We had to put in significantly more effort than for the last section in September which had been largely level, ascending 4 significant hills, Horsenden, Harrow, Barn Hill and Gotfords. All except Harrow lay in country parks and had the compensation of extensive views variously towards Central  London, the North Downs, The Thames Valley and the Chilterns. Horsenden Hill has some attractive mature woods with an open summit. Our short rest there was slightly curtailed by some ongoing filming, apparently for a film project. The director could have been more polite in asking us to move, but it didn't seem worth arguing over. Barn Hill was my favourite, its summit surprisingly secretive and hidden in broken woodland. It somehow manages to have a pond on top, where a heron held court. Just round the corner the mood changes completely, and we had an excellent close up view of Wembley Stadium with its now-famous arch. Our final hill, Gotfords, was much more open and windswept, and with its extensive views in all directions provided a fitting end to the walk. From its summit we left the Capital Ring to descend to Kingsbury and the Jubilee line with its frequent trains back to central London.

Thanks to my co-leader Robin and to our fellow walkers who helped to make this a great day out. 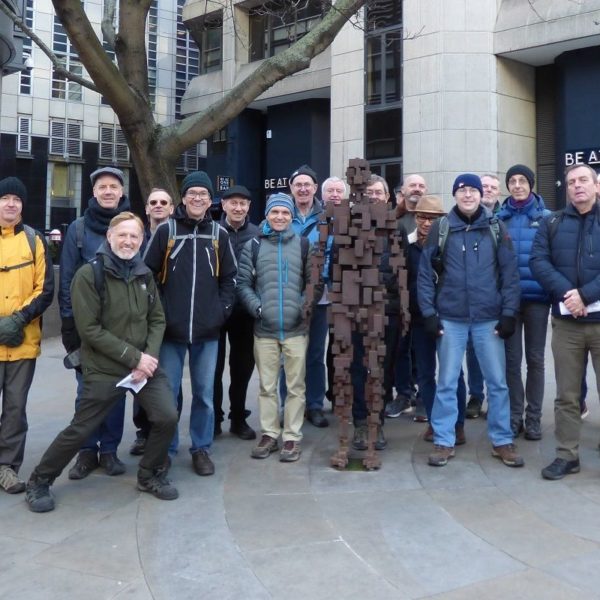