The weather was not particularly sunny, but the promised cloud held off at a high level for the whole of the walk. We started for a mile or so along an old railway line adjacent to the the beautiful Llyn Padarn until we reached 'Penllyn' - the head of the lake - where we enjoyed one of the classic views of the lake and Snowdon and the Glyderau at the far end and took a group photo. The return leg was a bit more complex as the lakeside path is still used by the tourist train tha truns alongside the lake, so we headed off to follow a complex, twisting route through an area of old settlements and narrow walking paths to the highest point on the trip. Here we clambered a short distance up on top of a rock outcrop for lunch and spectacular views to Snowdon and the mountains. Then we dropped down to a lane for a mile or so before another set of old paths, tracing a route through old slate quarrying remains, finally reaching the delightful woodland of Parc Padarn. Here scores of trees, which had developed a stance that enabled them to withstand the usual fierce westerly winds, had been blown over by the galesof the 'beast from the east' coming from an unexpected direction last winter. Then we dropped down to the National Slate Museum for cream teas and a cuppa before finishing the last bit of the circumlacustrine perambulation back to the starting point 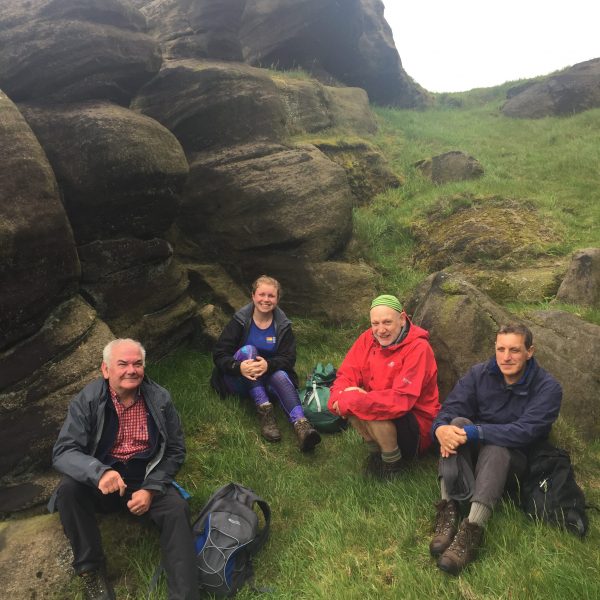