Despite 6 weeks of scorching weather, the weather forecast for 28th July showed strong winds and heavy rain.  Nevertheless 16 walkers from the Gay Outdoor Club Annual Outdoor Gathering in Telford, plus leader Julian and back-marker Rick, met at 10.00 in Church Stretton for a strenuous walk over Caer Caradoc and The Lawley.  They took the steep ascent up Caer Caradoc from the south and made their way purposefully to the top where their efforts were rewarded by magnificent views of the Long Mynd, Hope Bowdler and the Wrekin in the distance.  They also had the awe inspiring view of The Lawley before them to the north which they had to tackle before their leader would allow them a lunch stop.

The descent of Caer Caradoc was equally as steep as the ascent but the climb up The Lawley was easier and they soon reached the highest point.  By now, the wind had increased and there was a squally shower before they finished their lunch.  The rain stopped by the time they reached the northern point of The Lawley and the return path at a low level down the western side of The Lawley was completed in warm sunshine.

The rain came back with a vengeance while they were returning to the southern tip of Caer Caradoc.  The path took them through waist high bracken so everybody got very wet.  Luckily the rain stopped for the last half hour of the walk and they got back to Church Stretton dry enough to visit a tea shop for tea and cake.

The walk was shorter than the advertised 12 miles at 11.3 miles and took half an hour less than the recce.  This shows either the benefit of walking in cooler weather or that Julian and Rick are a couple of slow coaches when left to their own devices. 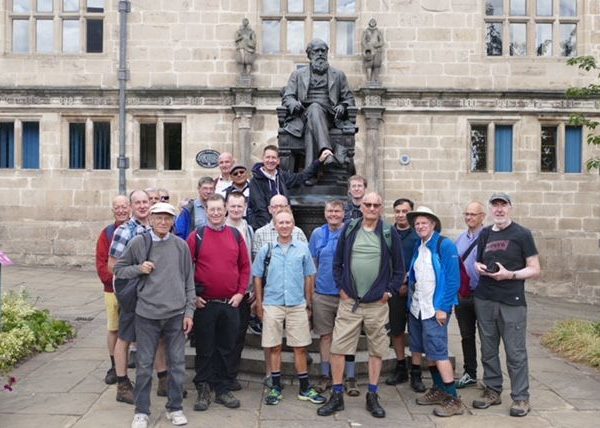