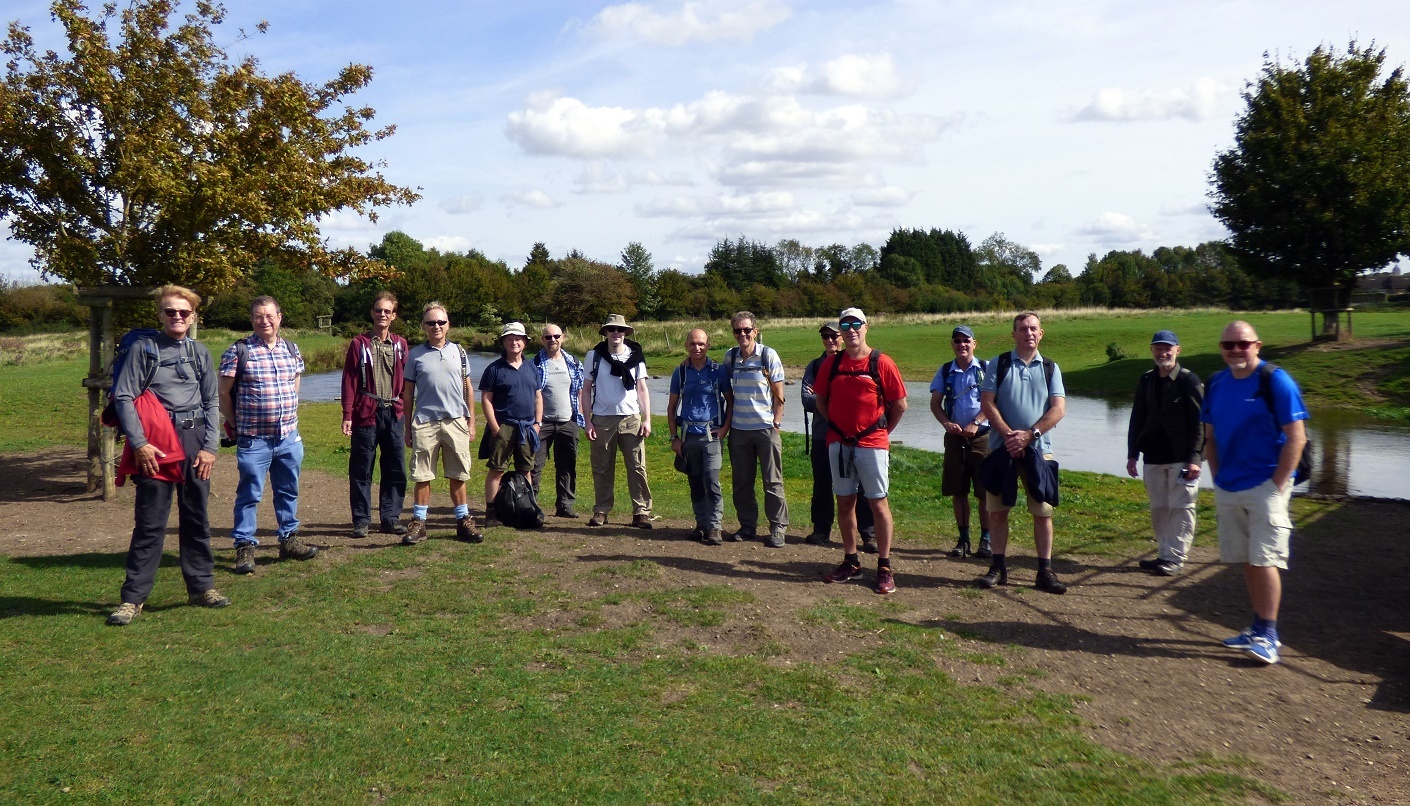 The route featured tranquil countryside nestled between small towns of Beds.  Much of the countryside features meadows alongside rivers and lakes.  The meadows occasionally featured livestock.  Specific features included a Georgian mansion (now a well-known health spa), a C15 church claiming connections to the Pilgrim Fathers, an ancient bridge, two nature reserves and some very nice riverside houses.  Part of the route used the long-distance path the Kingfisher Way.

Lunch took place in peaceful parkland alongside the River Ivel.  The parkland is named  Henlow Millennium Meadows and owned by Henlow Parish Council.  The parkland included two works of art made of wood: one kingfisher stuck onto the side of a bridge, in mid-plunge to catch its prey; and one owl perched on a tree.  Some discussion ensued about what species of owl: we concluded that it was the lesser-spotted Marty Feldman owl, given its eyes were in all sorts of directions.

Bright lighting all day offered the richest colours of this varied, textured countryside.

The church was St Mary's Church, https://www.achurchnearyou.com/church/7793/, wiki.  The connection to the Pilgrim Fathers is allegedly that at least three parishioners travelled to America.

The Georgian mansion at Henlow Park was a Champneys spa, https://www.champneys.com/spa-resorts/champneys-henlow/  We stopped to admire the property – all very nice to know that somebody else pays for its upkeep – but declined to pop in for a manicure or two.

The ancient bridge was Arlesey Bridge, a medieval structure over the River Hiz.  The bridge is made of local sandstone.  Styled of its era, it features a classic pair of pointed arches.  It was probably standing in the year of a survey of Etonbury Manor in 1566, perhaps standing as early as the mid-15th century.  By 1807, it needed substantial repairing.  A few years later, in 1851, the timbers needed repairing so the owners took the opportunity to widen the bridge, to accommodate the increased traffic attracted by the new railway.  The bridge was restored and re-enforced in 2001 to handle the construction traffic for the A507 flyover.

The riverside houses were at Langford.  The River Ivel courses northbound, with the properties’ back gardens bordering the river on its eastern bank (location).  All of the gardens made use of the location, by means of either patios or cuttings on the riverside.  The path is part of the Kingfisher Way.  Central Bedfordshire Council has bought some land to create a nature reserve; its proposed name is Seal Bank.

We were extraordinarily lucky to see a grass snake sunbathing in the open field.  As soon as it was warm enough, it disappeared fairly quickly.

We took our group shot on common land by the River Hiz.  This scenery is typical of the area: low-lying lands, flood plains, falling to form a shallow river bed, with a broad body of water flowing stoically to its nearest sea.  The group shot is also disorientating, because unlike the rest of Hertfordshire, the rivers in the Hitchin area belong to the threshold of the River Great Ouse, meaning water flows northbound towards the Wash (elsewhere in Herts, rivers flow southbound to the Thames).

At the end of the walk, a few of us socially-distanced ourselves to the pub, The Old Oak, a Greene King pub.

More pictures are at https://photos.app.goo.gl/xk6HRMcNhAt66wPX7.

We are updating the look of our site, and adding some new features. You may be unable to access the site for a few hours from 10pm on Sunday 19th July while the updates are installed. Dismiss